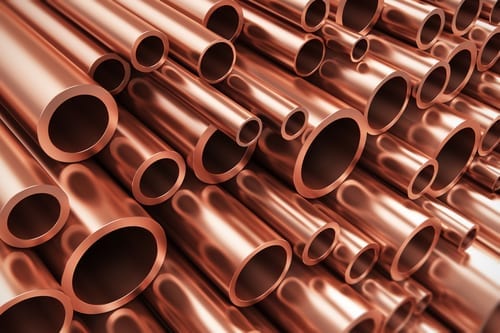 You have had enough with your old pipes, and you have decided to repipe your home. For many homeowners repiping their home is a scary proposition. But once the project is completed, you’ll wonder why you didn’t do it sooner. Your water pressure will feel like a new home and there will be no more worries about leaky pipes. Homeowners can still choose which pipes are right for their home. There are two types of piping being used today for your home repiping, PEX and copper.

PEX Has A 40 to 50 Years Life Expectancy

The acronym PEX stands for cross-linked polyethylene. In 1968, Dr. Thomas Engel developed a method to chemically cross-linked polyethylene which forces molecules to physically and permanently connected. In 1972, Engel partnered with Wirsbo company to launch PEX to the Europen market. In 1984, Wirsbo opens its North American market in Rockford, Illinois, for radiant floor heating. then In 1988, Upnor moves to Lakeville, MN and the plastic pipe manufacturing conglomerate Upnor acquires them. At that time, Upnor had 40 factories operating around the world, and the rest is history. In 1993, Aqua PEX® became available, it gave the plumbing industry new options, CPVC, and copper. The pipe has a 40 to 50 years life expectancy, and it’s much easier to install. It costs less and can withstand temperatures of 200 Fahrenheit.

For some homeowners, they say, “Not so fast, I still want copper pipes for my home,” and they have that choice. Copper pipes have been a mainstay in the plumbing industry for the better part of 60 years. From the 1800s to the early 1960s, it was galvanized steel pipes and then copper completely took over both new construction and home repipes. The life expectancy for copper pipes is 40 to 50 years as well. Some homeowners aren’t sold on PEX piping just yet regardless of the value. You really can’t blame them because copper’s been a quality pipe for many years and still is. For many customers that need their home repiped, they’ve never heard of PEX because it didn’t start taking on steam until the turn of the century.

PVC Is Another Pipe Use For Your Sewer Line

While PVC is not for repiping your home, it is an option for sewage applications. The application of the product will determine the thickness of the pipe. For example, sewer pipes are not the same as pressure water pipes, and they also differ from a pipe used in storm drains. Some PVC pipes must comply with specific health requirements. In most cases after 1970, PVC is the pipe of choice for sewer lines but in some rare instances, cast iron or clay pipes can be found. If you’re a do-it-yourselfer repairing or replacing your sewer line, PVC is the way to go. The product is inexpensive, lightweight, easy to cut, and can be purchased at your local home improvement store. Homeowners you can still choose which pipes are right for your home.